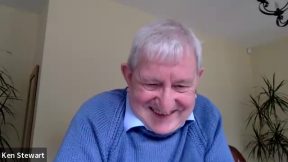 Pipers’ Persuasion has had a chat with one of the stalwarts in the pipe band scene in Northern Ireland – Harry Stevenson.  A lifetime piping with the Robert Armstrong Memorial pipe band, allied to years of teaching and adjudicating bands in NI and Scotland gives Harry a great insight into the whole scene and even now has great pipes and fingers that can rock out a fine tune.  Harry has been teaching a long time and he shares many of his experiences with you.  A quiet thinking man who commands great respect from Bandsmen.  (Incidentally Harry used Ken Stewart’s iPad on Zoom – hence the label)

Harry Stevenson; 5;setting up with reeds