Pipers’ Persuasion is a collection of exclusive video interviews with some of the greatest and most influential piping and drumming personalities of the modern era. You can read the text below or watch this video clip in which Allan Hamilton welcomes you to Pipers’ Persuasion and explains a little about what you can expect from the series of video interviews of world famous piping and drumming personalities to be found on the website.

Volume by volume, Pipers’ Persuasion will become an unsurpassed historical back catalogue of personal accounts and recollections which will build a vast picture from a variety of perspectives of how the tradition of Scottish piping and drumming music has evolved all over the world to what we are accustomed with today.

Each Pipers’ Persuasion episode is around one hour long and sequentially chaptered in individually embedded video players to offer you the best possible flexibility over what you would like to learn from each personality, but you will soon discover that every interview is worth sitting down and watching from start to finish.

And the beauty of Pipers’ Persuasion? No subscriptions, no advertising, no hard sell… it’s all completely free. Pure gold! 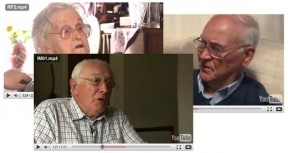 In early 2010, Pipers’ Persuasion began meeting some of the greatest living individuals who have influenced the history and the development of Scottish piping and drumming, with a view to sitting them down in front of a camera and delving into their pasts. Some agreed eagerly, others took a little more convincing. But in common, they realised that Pipers’ Persuasion was undertaking an ambitious piping history project that would be a gift to the entire piping world.

Pipers’ Persuasion takes into account the valuable work done by the many who have interviewed prominent persons in the piping world, whose results have been written and published in piping magazines, taped interviews and indeed live encounters on radio and TV. The website merely seeks to compliment this past and continuing work by those devotees who have stayed the course over decades in order to keep the public fully informed.  We acknowledge their hard work and enthusiasm and would seek to try to give an additional view by providing video recordings showing personalities describing their knowledge by voice, tone and body language in a relaxed and entertaining manner. It is our hope that the interviews will help to pass on knowledge to our younger viewers.

The Man Behind The Persuasion

Allan Hamilton of Kilmarnock is the brains and brawn behind Pipers’ Persuasion. A lifelong piper; Allan at his peak played with the world famous City of Glasgow Police Pipe Band, later to become Strathclyde Police Pipe Band. Having retired from Strathclyde Police at the rank of Chief Inspector, Allan worked as an investigator with Hughes Dowdall in Glasgow until his ‘second retirement’ beckoned in Easter, 2009.

Allan still plays an active part in the piping community today. He is a frequent attendee at solo-piping competitions and recitals and has been active with pipe-bands over many years, most prominently with Glasgow Police Pipe Band. Additionally, Allan is part of the McCallum Bagpipes family, having long served the rapidly blossoming Ayrshire bagpipe manufacturers as an ambassador at home and abroad and as the well known host of the McCallum Bagpipes Roadshow.

To set the ball rolling, Allan had a little persuasion left to do. He needed a professional cameraman and a website designer to bring the Pipers’ Persuasion project to life. He was fortunate enough to recruit Paul Russell, who agreed to provide his audio/visual and production talent to the project on a voluntary basis and also Scott Currie, who was happy to volunteer his Web experience to the project. More recently Pete Heywood of The Living Tradition brought in his expertise with computing and magazine talents to lend much appreciated support.

After a frenetic summer of preparation, filming, editing, production and Web development, Pipers’ Persuasion was completed before the end of the 2010 pipe band season and officially launched on Wednesday 1 September, 2010.

Pipers’ Persuasion has continued to build with new interviews being posted regularly on various themes many of which are overlapping and interlocking.  It is worthwhile to look on earlier episodes to fully realise the extent of this.   Our site explores where there is a gap in knowledge and seeks to fill that.  Various different ways of presenting the material are constantly being looked at and yes, some are more successful than others but we do enjoy the adventure in trying to upgrade our skills for the benefit of the viewer.

Our work is very much a ‘labour of love’ and in order to make the site as accessible as possible we do not charge for access to the site. However, financial considerations do put limits on what we can achieve. If you would like to donate to our work, please use the Donate button in the right hand column of this page. If you would like to support a particular project or help us to initiate a specific project, please contact us at hami180@btinternet.com